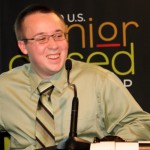 I got a surprise e-mail about three weeks before the tournament from Tony Rich, the chief organizer of the Junior Closed and Women’s Championship, inviting me to play in the tournament. When I first read the invitation, I really wanted to play because I hadn’t really played in a strong tournament for a very long time. But, I was in the middle of a summer internship and plus, it looked like it was going to cost a good deal of money: airplane flights, hotel reservations for 12(!) days, etc. But it turned out that the chess club was going to provide these accommodations, as well as several others, and together with a pretty amazing prize fund, it was impossible for me to decline it.

I really wasn’t that confident going into this tournament. Almost everybody had been playing in strong tournaments during the summer, while I hadn’t really faced this level of competition for a long time. However, I thought I could do well since so far in the summer, although I didn’t play anybody as strong as the players in the Junior Closed, I did win every game I had played, and so I thought maybe I could bring this consistency to St. Louis.

Round 1: I arrived on time to the game, but my opponent, John Bryant, did not. After the game he explained that he had gotten lost because he had not been to the club before and walked right past it. Actually, he might not have found it for a while later had it not been for Darwin Yang’s father, who saw him on the other side of the street and yelled at him. But he didn’t lose too much time, only a little more than ten minutes. I played 1.d4, and the game moved into the King’s Indian defense, where he played the slightly offbeat system with …Nbd7 instead of …Na6 or …Nc6. It is a very reasonable setup that Anand tried several times successfully himself in his youth. I had a nice advantage out of the opening when he played a move which gave me an extra tempo for the middle game, but after a couple of inaccuracies the he began to gather an initiative. In mutual time pressure, my king became very exposed, and with just a couple minutes left on both sides, he decide to sacrifice a knight for two pawns to eliminate my king’s final pawn barrier. It turned out that this sacrifice was winning, but he had to find a forcing variation, with several “only” moves, and he failed to play it correctly in time pressure. After defending my king, I ended up with a clear extra piece in an endgame with queens. So I got my first win, albeit with a little luck in time trouble, and to me this was a good sign: usually the tournament winner has luck on their side.

Round 2:  I played Sam Shankland with black after he suffered a tough loss in the first round, and I was very confident going into this one because before the tournament he was having a difficult time getting into a rhythm. We had both analyzed a variation of the Bogo Indian defense extensively, since he knew I would play it (I have a large number of games on ICC in the line), but when I played a different move order in the opening he got his lines mixed up, played too quickly, and gave away his advantage early on. After trying to play actively his pawns became critically weak, and he sacrificed a couple of pawns for activity, but in turn I gave up the exchange to get two monster passed pawns and a knight out posted on d3, and he resigned early on because he felt his position was already hopeless. This game gave me some momentum going into the next game, because to beat the #2 seed in convincing style as black, even if Shankland was somewhat “irresponsible” in his fast play in the opening, gave me some confidence.

Round 3: I was scheduled to play Tyler Hughes with white, and we had both prepared for a theoretical King’s Indian battle, but at the board I decided to throw away both of our preparation and I played the Botvinnik System as white. This was probably my best game of the tournament, ending in a beautiful crossfire mating finish, and when I arrived in the media room I received a round of applause for the game, and also because I had wrested clear first.

Round 4: I had played Darwin before as black in the Nimzo-Indian, and won that game, so I played the Nimzo again and he played the more aggressive Samisch variation, and he got a small opening advantage. However, I had a solid position, and we both maneuvered, until I decided to sacrifice a pawn in order to activate my pieces. It worked out well and I got plenty of compensation for the pawn, and after he blundered I obtained two pieces for a rook and a winning position, only to blunder and lose my advantage, and a difficult endgame. I played very well in this game at first, but then I played significantly weaker at the end of the game. I was getting tired, and my absence from strong tournament play was beginning to show: I was not able to play at a high level for the whole game.

Round 5: I was happy to play Eric Rosen as white, since he is a very classical player and I like playing against those sorts of openings. My opening preparation worked out very well and soon we got into a position that he was not familiar with. I had a very comfortable position out of the opening, when Eric offered a positional pawn sacrifice. If I had declined it, I would have retained my positional advantage, but I decided to not pass up the opportunity, which turned out to be an error in judgment. He got very active pieces in return, and after I committed several endgame inaccuracies, he got a winning position and converted the full point easily.

Round 6: I was close to achieving equality in an offbeat Sicilian out of the opening as black, and I managed to fully equalize, if not get an advantage, in the middle game. However, the game transferred into a very sharp endgame which required accurate play, and Steven Zierk, in his element, outplayed me without too much difficulty and won. Again it was clear that I could not compete at a high level for the whole game, and I was losing more of my energy.

Round 7: I was happy to be white against Conrad Holt, because he appeared to be tired from previous tournaments and in general he plays solidly as black, nothing extremely sharp, so my opening preparation did not have to as specific. He played an opening that gave me “hanging” pawns in the center, but I had good active pieces. He played very provocatively and I could not resist sacrificing a piece at one point in the game. He defended very precisely, but I declined a perpetual check in order to try and win. However, this again turned out to be an error in judgment and Conrad confidently converted his material advantage.

Round 8: I also went into this game relatively confident, because Parker usually avoids opening disputes and moves the battle to the middle game, and so I thought I could probably get an equal position without serious difficult. This did occur, and, in fact, I actually got a large advantage in the middle game. However, for some reason I played timidly, winning a pawn, but I allowed him to generate a lot of counter play on the kingside, and eventually it was too much, and he won, albeit with a few questionable moments. Yet again, I was unable to keep playing at a high level for the whole game, seemingly a theme for my tournament.

Round 9: Going into the last round, the situation looked good for Ray Robson: He led Parker Zhao by half a point, Shankland by a full point, and Parker was playing the number three seed, John Bryant, and as black no less. Meanwhile, he was playing me, who had lost five games(!) in a row. A draw would have been fine with him, since then Parker would have had to win with black in order to tie, and Robson had won their individual game in the tournament. But for some reason, in this game I was much more determined than in any other this tournament, and I had several goals for this game: 1. I wanted to redeem myself and show everyone that I was really a better player than my score in the tournament would suggest. 2: I wanted my first GM scalp. 3: I wanted to mess up the tournament situation and create some turbulence. Robson also made a mistake, in my opinion, of playing the King’s Indian Defense. Since a draw would have been a fine result, and since the KID is very good at producing decisive results, I think he should have avoided this opening. I played the solid fianchetto line against it, and we reached a thoughroughly studied position which I was very familiar with, and which Robson was not entirely confident in. He played a very aggressive line of play that was strategically risky, and this backfired. I played simple and strong moves, and soon he was forced to sacrifice two pieces for a rook and two pawns, but unfortunately my pieces were much more active. I sacrificed an exchange to get three pieces versus two rooks, and also a passed a-pawn on the seventh rank, and this turned out to be too much for his uncoordinated rooks. I won the game without too much black counter play, and so I had succeeded in surprising just about everyone.

And so I managed to do something very strange in this tournament that I had never done in any other tournament before: I defeated the top three seeds, but not only did I not win the tournament, I finished 8th out of 10! But that was fine with me. Robson was really level headed after the game and displayed he had a character that was up to par with his title. Shankland had won, so he and Robson were already tied with 6 points. He did become very nervous, however, when Parker Zhao got an endgame of two pawns, bishop and rook vs. knight and rook, and Zhao got some real winning chances. After lots of analysis, tablebases, and nervous moments for Robson, John Bryant miraculously drew, and so Zhao, Robson, and Shankland were all tied for first. So it turned out that I did actually succeed in creating a big mess (along with John Bryant too, of course).

This tournament taught me, or rather reminded me, that one of the most difficult things to do in chess is to win a won position. My coach in high school, Sam Palatnik, used to say that a wounded bear is the most dangerous kind of bear, since in fighting for its life it is more aggressive than it normally would ever be. But one of the best aspects of this tournament was the St. Louis Chess Club: it is by far the nicest club I have ever been to, and the staff was very classy and treated all of the players really well. Going to a chess club like this really makes you want to work harder on your game. 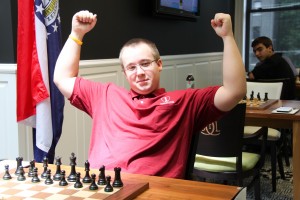