Below is the link to one of the most recent publications on Sam. Making a 2200 USCF being 9 years old is a Super Achievement by any standards. Congratulation to a fellow Armenian and his coach, my old friend Andranik Matikozian. 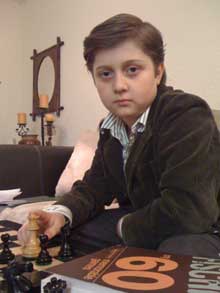 A 9-year-old boy from Santa Clara has earned the title of the youngest “national master” in United States Chess Federation history.

Samuel Sevian officially obtained the title Dec. 11 in San Francisco when he received a rating of 2,201 at the precise age of 9 years, 11 months and 15 days. He’ll turn 10 on Sunday.

“It feels good,” said Samuel, a chess prodigy, fourth-grader at Don Callejon School and a child of few words.

“I’m not as good as Sam,” his father said, explaining that he only has attained the expert level, while his son is a master.

Father and son often play chess together, when the elder Sevian, a physicist, isn’t developing lasers at Coherent in Santa Clara, where the family moved two years ago from Orlando, Fla. They’re the only two in the family who enjoy the game.

Neither Sevian’s wife, Armine, 37, nor his 8-year-old daughter, Isabelle, are chess-o-philes. Isabelle prefers to dance and play violin, her father said.

“Every attempt to teach her to play chess fails,” Armen said with a laugh.

Samuel spends at least two hours a day studying chess moves in books, playing with his dad, and practicing on Skype with his coach, international master Andranik Matikozyan, who lives in Los Angeles, where the Sevians are heading for Christmas.

“I met Samuel three years ago in Santa Monica at a tournament when he was 7,” Matikozyan said. “When I saw him playing, I was amazed. I thought, ‘This kid is really talented.’ ”

Sevian said his son does very well in school, too, often maxing out on his math scores.

“He is obviously very gifted,” said Don Callejon Principal Hans Barber. “On Thanksgiving break, we gave kids a math challenge, and he won. He has a problem-solving mind.”

Barber gave Samuel lots of credit, too, for attending tournaments, doing so well in school and “holding it all together.” Samuel is “too intense” to participate in the school’s chess club, but Barber is sure that he inspired other students to take up the game.

Samuel said he likes to read when he’s not playing chess; his favorite fantasty-adventure series is “The Sea of Monsters,” and when he’s allowed to watch TV, he enjoys Disney’s “Suite Life on Deck.” Sometimes, he plays recreational soccer.

But for the most part, Samuel’s life passions set him apart.

Who else in Amanda Watson’s fourth-grade class has a Wikipedia page, which outlines his chess accomplishments, including the fact that with this latest title, he nudged out Nicholas Nip from the record as the youngest national master by 11 days?

And this wasn’t Samuel’s only major chess milestone. In February 2009, Samuel became the youngest U.S. chess “expert,” at the age of 8 years and 64 days.

He’s been playing since he was 5.

“I like the tactics and the combinations,” said Samuel, who comes from a culture where chess players are held in high esteem. The Sevian family is from Armenia.

State Grade Champion Brian Hu annotates one of his games