Thanks to the 9 Queen’s organization, on December 20th we had a surprise visit from one of the leading US chess players-  GM Aleksandra Kosteniuk- the current Women’s World Champion. She is one of the very strong Women GMs who are very successful playing against the World elite players. She is also one of the first chess “ladies” who made a career as a model and a spokesman representing various businesses. She conducted a simul for about 30 players of every level and had a pretty good result- couple of draws and no losses. It was a pleasure being there and see so many of the Arizona Chess For Schools students participate. I hope many more of such events will take place in Tucson and thanks to Jean Hoffman for running this event. Hope to see Aleksandra here again sometimes!

Here is one of the games from the simul:  Enjoy it.

1.e4 GM Kosteniuk did not spoil players at the simul with many starting moves or side lines. That made it more interesting as the strong players got a chance to try their openings in one of the harshest tests they will ever face. 1…c5 2.Nf3 e6 Is this going to be a Kan or a Taimanov? 3.d4 cxd4 4.Nxd4 Nf6 5.Nc3 Bb4!? Nop! Pin variation. It has a bad reputation on the highest level but Troy logically concludes that it is better to play a slightly questionable line than invent something on the spot. 6.Bd3 Interesting choice by Kosteniuk. No doubt she knew the main line with 6 e5, but wisely chose to not play it in a simul as from experience I know that getting extremely sharp lines in a simul brings your rating down by about 300 points. 6…Nc6 [6…d5 this is slightly more popular- with about an even game] 7.Nxc6 dxc6! 8.0–0 [8.e5!] 8…e5 It seems like Black has effortlessly equalized but of course the whole game lies ahead. 9.Bg5 0–0 10.Qf3 Be7 11.h3 b5 12.Rad1 Be6!? 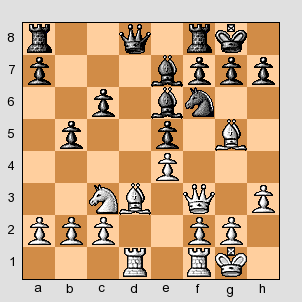 [24…Rad8 Also possible] 25.Bb6 Nd2 Not bad but the odd looking Bc1! is better- shutting down the Rb1 and preparing ideas with Rd1–Nd2-Nf1 attack. Very hard to see in a game! 26.Re1 e4 27.Bc7 This looks very strong but Black has adequate resources. Rc7 may have been a better try for White. 27…Bd6! Very strong move! Normally, when once side attacks- trades are not the best way to solve issues and here not only Black trades but also retreats the active looking Rook. However, it solves lot of problems for Black as well as builds a base for very unusual attacking chances. 28.Bxd6 Rxd6 29.b4 Rc2 It is very hard to chose between good moves such as Rc2, e3, f3 and rg6. I was glad to see that Rc2 does not spoil anything. 30.Nc5 e3 [30…Rg6!? Also may be very good] 31.fxe3 Rg6! 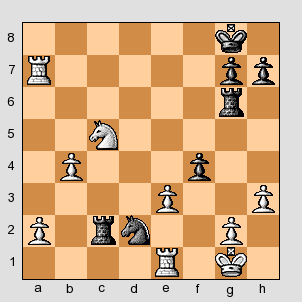