The 4th one of its kind event took place at the spacious Tucson Chinese Cultural Center on December 17th.

What a wonderful tournament! In addition to a record breaking participation, we also had a great turn-out in the “Master” section. It is a section that is notoriously hard to organize, since many professionals are not only often unavailable for playing, but also usually want even stronger people committed before they decide. This “which came first: chicken or the egg” problem often makes the highest section of tournaments a problem for the organizers. Not this time though.

With the addition of  one of the ACFS new coaches- International Master Mac Molner, we were able to draw other strong players (scuh as GM Pedram Atoufi and IM Joel Banawa from Scottsdale) in and then the group of 1900-2100 poured in. We even had Kiana Arab coming from Scottsdale (one of the strongest girls in AZ) What was wonderful to see is that the heavy favourites were given very hard tasks to solve by the much lower rated “A” players and that is a wonderful and encouraging sign for any coach to see.

The lower groups had the usual division by rating  and many times by age: you could see a 7 year old battle a 60 year old!

Trophies and medals as usual were in abandon (3 class trophies and 3 medals per group) and they were given often based on performance rather than exact tie break spot they got. We believe that helps us motivate lower rated players to shoot for the stars and not be afraid to be in the same section as the “big boys”. An example from the last round (shown below)- Mac could not go past the stabborn defense lines of Ethan Li.

Thank you all for coming, for bringing your kids to the tournament and spending several hours there watching them. Also my gratitude goes to Mac, Pedram, Joel and the TCCC administration for helping us run such a nice event.

The link to the tournament result can be found here: http://main.uschess.org/component/option,com_wrapper/Itemid,181/ 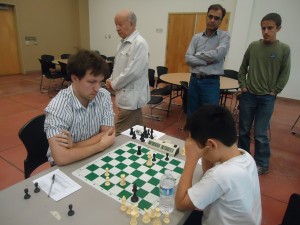 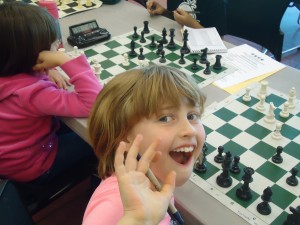 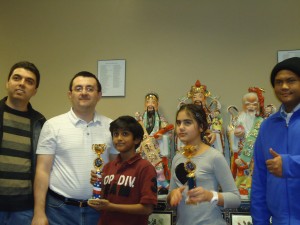 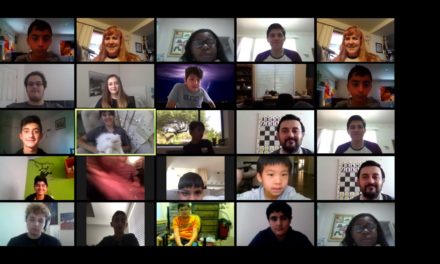