2010 US Chess Championship in St. Louis

I had the most wonderful and overwhelming experience last week at the 2010 US championship, held in St.Louis,MO. There was no illusion about the strength of the field: 24 best players of the country competing for the highest titles, 170K prize fund and the 5 spots of the Olympic team. This tournament traditionally provides a chance for the Grandmaster and International Master Norms too. I remember how in 2002 I was about to get my 3rd and last IM norm, when the usually very nice and very pleasant GM Seirawan jinxed it for me with the words ”I heard you are very close to the Norm!”.This time I hoped it will turn out differently.

Many of you have already read on the USCF, SACA and ACFS websites the drama and the excitement surrounding the final spot to the US Championship spot and how I was able to get that ticket. The amazing thing that talks highly about the 2010 US Championship is that with a FIDE rating of over 2450 I was the lowest rated player in the entire tournament. I cannot recall any other tournament in my last 20 years of competition participation where I had the pleasure of being the honorable first from the  bottom.

Therefore, I had set several goals-small and big. First and foremost, if possible, to go for a GM norm. If that fails  (like it happened after I declined several draws and lost) , then try to play well, gather very valuable experience (when else can you play 9 Grandmasters in 9 rounds) and make sure I place somewhere in the middle of the pack.

There was another fun question on my mind that is hard to quantify: how does a tournament get affected when a player is staying with in-laws? I am embarrassed to admit, but it worked out very well (nice place, home cooked meals and a car at your disposal and casino visitations every other day) but I think that is a lucky exception for the majority of chess professionals.

After 2 nice draws against GMs Kudrin and Shulman (who got into the Finals this year) I was in a mood to hunt for the GM norm. But after trying to win equal positions in several games, I was unpleasantly and cruelly reminded why these guys are the best of the best. Probably the hardest loss was to GM Benjamin, where I missed about 2-3 wins, but finding few piece sacrifices in the correct move order, having 5 minutes on a clock, is apparently not my cup of tea.

At the end, after a lot of drama in almost each game, when it seemed I am losing all the games I was trying to win, I ended up with 3.5 points tying for the 18th place together with GMs Khachian, Lenderman and Bhat. It still was nice and as GM Khachian put it “we made it to the very top- now let’s just enjoy the tournament”. Being in the top 20 in the US, along with all the US Champions, Olympic Team members and young superstars, I consider a good result.

Special Thanks go to the Organizers, the St.Louis Chess Club and the founder Rex Sequifield for making such a top notch tournament be possible and be truly befitting the most important tournament of the year. The final closing Party with all the wonderful catering, with a Lady Gaga impersonator and GM Finegold dancing on the floor like a superstar, topped the event.

I’ll definitely try again to qualify for now the 2011 US Championship but it will be extremely tough and therefore very exciting. 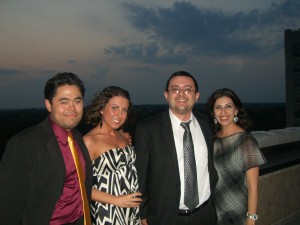 State Grade Champion Brian Hu annotates one of his games