Her 1st trophy ever! A short recap of a proud dad.

The Amateur West is one of the most exciting chess events for any chess enthusiast in Arizona. Even though it is mainly an event for adults, more and more young players try their skills in the main tournament or at the side events- such as the scholastic tournaments that run parallel to the Main event. Rather than concentrating on the winners of those multiple sections, we wanted to share a short but very inspirational paragraph of a Chess Dad. Erin Oxnam has played before for the Castlehill Chess Club, but this is one of the very first times she played in an Individual section.

We hope this will serve as a great motivation to all those Moms and Dads who are not sure what to expect or wonder if the kids are too new or too young for such events. Good luck Erin and great job! Here is a picture of Erin with her first ever chess trophy – a fifth place in the US Amateur West Chess Tournament. It was a three day tournament with trophies given at the end of each day. Erin and I planned to go to the first two days and decide on the third day because she would miss the first day of  Reading & Science Camp. She had her ups and downs the first two days and knew she could do better. So she asked me to bring her on the third day which turned out to be a great choice. By Bert Oxnam 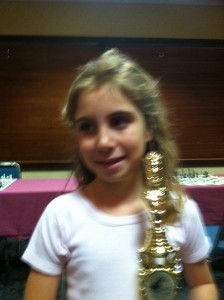