Below is an exert from Thomas’s personal experience at the tournament. Great job!

Check out the results at the USCF main website: uschess.org.

When I woke up on Saturday morning, I was excited. It was January 9 and time for the Arizona State Grade Championship. I quickly got ready for the long drive my parents and I would have from Tucson to Gilbert. We loaded up the car and were off in good time.

Unfortunately, about 30 minutes into the trip we were caught in slow traffic due to a semi rollover on the interstate. I was stressed because I feared I would not arrive in time for the start of the tournament. Eventually we drove up to Mesquite Junior High School with 20 minutes to spare. I immediately headed over to the school gym that was the playing hall for grades K thru 6. I checked out the hall, got my pairing, and sat down to start a day of playing chess.

I played my first game and won. Lev had been teaching me about pushing pawns and squeezing my opponent. I used these techniques on my second game and earned my second win. On the third game, I applied an assortment of different types of tactics for another win. The end of the fourth game was very tense because there were many chances for me to make an error and draw, but I won.

After this game, I was in clear first place. When I saw the pairings for the fifth and final game, I realized I was playing the highest rated person in my division at the tournament. For this game, my strategy was to win, but if I drew I would still be co-champion. It was a fierce struggle. All the other games in the hall finished and all the other chess players left the area as my game continued. Finally the game was over. It was a draw. I had earned 4.5 out of 5 points.

In the end I was co-champion with Jonathan Booher. During the tournament I had a performance rating of 1901. I was very proud of what I had done. 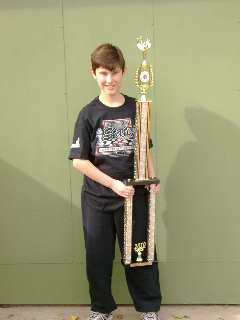