Organized by the Metropolitan Chess (metrochessla.com)

The 1st one of the 2 back-to-back events organized by Metropolitan Chess (the brainchild of the ever charismatic Ankit Gupta) was held August 17-22 in Downtown Los Angeles Sheraton Hotel. The official name of it was “1st International” but it felt like a very mature tournament. We even had a special treat of dinner and ice cream right before the opening ceremony where players had a chance to interact with old friends or make new ones.It was one of the best organized events I ever attended and it was a pure pleasure being part of. The tournament attracted (or maybe it was just the great financial conditions given to some?) many world level Grandmasters as well as dozen rising new young stars. It was wonderful seeing world class players Adams and Van Wely do their very best to outwit newcomers and fellow Grandmasters. At the end rating and experience prevailed although I would not say it came easy to the super GMs. Unfortunately, even though this event was specifically geared towards allowing a chance for GM norm, no one got it, although 2 people got what looks like their final IM norms and will be officially International Masters at the next FIDE Congress.

Chess.com was running live commentaries all throughout the tournament, led by very entertaining IM David Pruess. One of the tournament winners (very talented young GM) Timur Gareev made a slightly shocking statement on the chess.com that he will beat Michael Adams in less than 20 moves in round 8. That of course didn’t happen, but Gareev did manage to confuse very coolheaded Adams and forced a draw in an inferior position. I managed a decent result although the chronic new problem of having difficulties being the Black side with strong opponents hampered my chanced for GM norms. The final Standings can be found though this link http://main.uschess.org/component/option,com_wrapper/Itemid,181/ 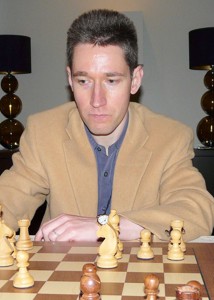 As it that was not enough- 1 day later we had the Round Robin event of category 10 where 3 Grandmasters and 7 International Masters battled for yet another prize fund and a chance for norms. Ankit joked that the reason he only invited IMs to this event who took part in the previous 1st International, is to even the field to match tired GMs with tired IMs. I thought he was on IMs side organizing this event! Unfortunately even though the general quality of the games were very high, it was easy to see how tired everyone was from the previous event. Even Ankit was half asleep and was barely walking at the end. It is very hard organizing 2 events one after another and putting all the energy doing so and not cutting corners. By the mid tournament, it was clear that even though 4 players had a chance for GM norms, Zhanibek Amanov had the best chance to achieve it. By round 7 only 2 people remained in contention. At that point Mark Ginsburg (from our own Tucson) was the proud holder of the very last place at the tournament, having experimented in almost every game with opening systems that mainly are so outdated that  have either obscure names or no names at all. By luck, last rounds he was playing the norm contenders who looked at him as the easy target, having survived the scary Grandmasters previously. I should mention that I couldn’t stop them either. That was the fatal mistake as Mark probably decided that he cannot personally allow anyone at that tournament have a title that is higher than his (and mine) and all of a sudden started showing his true ability. Is “Mark the Spoiler” a good new nickname?

That goes to show that at strong events everyone is very strong and scary and getting titles is harder than ever now with everyone having internet, Chessbase and RYBKA and FRITZ readily available. The only 2 people who had an amazingly consistent result were GMs Gareev (once again- that guy) and D. Bojkov. Once again, rating prevailed. Looking at last 2 tournament results, I finally realize the secret of success- get a high rating of 2600 and then you will do very well.  Just need 1 more small detail to figure out: how do I get that elusive rating? Can anyone give ideas please?

Here is the link to that event: http://main.uschess.org/component/option,com_wrapper/Itemid,181/

Thank you all for playing and Thank You Ankit for organizing such wonderful events. 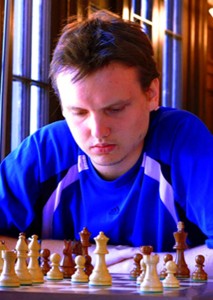 Her 1st trophy ever! A short recap of a proud dad.